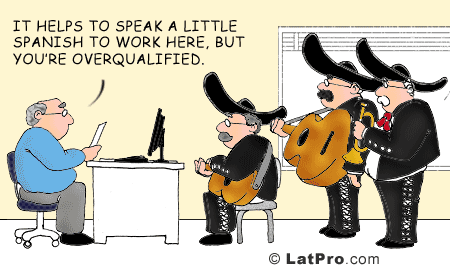 Despite my short time here at Gil’s Elegant Catering as the new Catering Assistant, I already feel part of this large familia. Everyday is full of exciting new challenges, especially with certain aspects of communication. In school I was busy studying anthropology and the communication between humans, here at Gil’s I have taken that one step further and I am extending my communication skills into the world of Spanish. In la cocina (the kitchen) here at Gil’s, on site, and really anywhere in Tejas, Spanish is the language to know.

Each day I have felt more and more comfortable here and have slowly stopped “eavesdropping” on the other employees who speak fluent Spanish and will occasionally and lackadaisically blurt out simple phrases that everyone knows. Some expressions that I have blurted out while coming and going from the kitchen include, Adiós, Hola, Bueno, and Gracias. At first I took everyone by surprise and made them giggle at some little “gringa” meaning “white girl or girl who doesn’t know Spanish” using everyday childish Spanish. But now some of the employees keep approaching me with random pronunciations in Spanish, trying to encourage me to repita por favor! (Please repeat after me.. aka entry level stuff) But I want to be impressive and come across as a James Bond-esque secret agent catering assistant that is constantly amazing people with tid-bits or random sentences in Spanish.

As a result, I have decided that it is time to spill more of my knowledge and impress them.

Just the other day there was a cat in the parking lot that needed to be rescued, so I thought, what a better time than now to use some of my Spanish skills. I quickly frolicked to the kitchen and exclaimed, “Tenemos un gato con los gatitos” meaning, “we have a cat with kittens.” Pedro quickly went outside into the parking lot and placed the kittens into a box, made a few calls, and each gato went to a good loving family.

Later that day Gil’s Elegant Catering received a phone call, but Juvencio was not in, so I took the message. What I did next would shock Juvencio, and that was the element of surprise that I was yearning for, I wrote his message in Spanish and gave it to him. (Granted, I had to look up the word “enough” to complete my sentence, but everything is coming along). He was so shocked and his face lit up like the Forth of July-full of smiles and you could tell that at that instant, he was impressed.

Now that my secret it out, some of my fellow employees have been testing my Spanish. Each day is different, and now I am both excited and anxious to go back and forth from la cocina-awaiting new surprise conversations in a foreign language.